On Monday 27th of June, I was witness to a lecture given by the former Arch-Bishop of Canterbury, Dr. Rowan Williams. I sat in the Worshipful Society of Apothecaries’ great hall, surrounded by medical doctors, philosophers and historians, and felt a bit of an ass-(not my girlfriend’s arse, because that just wouldn’t do in such company; I’m referring to feeling like a donkey….a sense of foolish shame).

The media, throughout my life, has frequently conjured such images of public figures, that I would be hard pushed to name one who was not in some way a buffoon, or worse, an out and out bastard. In  my mind, Dr. Williams had undergone such a make-over. A bumbling, irrelevant, Church of England (professed belief in any god of any type is always a poor start with me), Gandalf wannabee (what is it with the robes?), whose comments have been mentioned dismissively on many issues. Instead, Dr. Williams is a hyper-intelligent man, who has mastered eleven languages, and has an inspiring depth of knowledge of the universe from both a physical and meta-physical perspective. 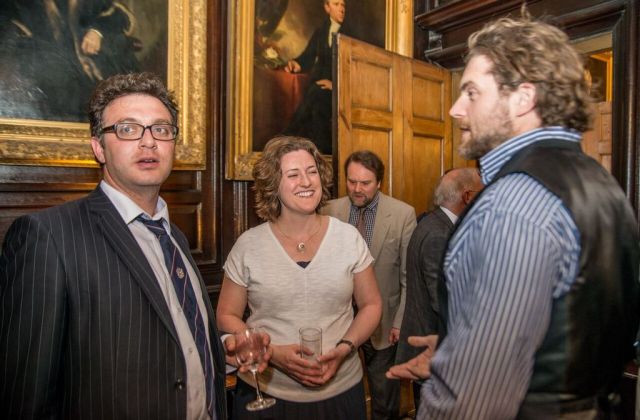 (Above) -Dr Andrew Papanikitas, Course Director for the Diploma in Ethics and Philosophy of Healthcare at the Worshipful Society of Apothecaries of London, chatting with me and his lovely wife Emma about the Lecture and Terry Pratchett 😌

My revelation came as I realized that despite my staunch cynicism of mainstream-media and their dubious objectives; I have been duped on many occasions into forming an opinion of a person, with no factual evidence. I have not researched their character, nor seen them with my own eyes, and yet I have judged them from the lazy position of a second, third or fourth hand opinion. I resolve that henceforth, my practice will be to reserve my opinion on those in the public eye until I have met the subject in question, or divined as many facts about them as I may, sifting through the slurs and blurs of others’ opinions.

I won’t repeat the lecture, but an absence of reference to his god or his opinions on Brexit from his subject matter, impressed me enormously. It would have been a serious lecture that I struggled to take seriously, had it been infused with gods. Though  he did not say it in exactly this way, I  was encouraged to take my beliefs outside and beat them, like a dusty old rug on a sunny day. I am goaded to re-evaluate and re-invent my relationship with the world.

I hadn’t written anything more than a few words on Twitter or FB for a couple of months. A quick fix to a financial issue in my own life had absorbed me, and when that played out to an unsatisfactory end( leaving me worse off than before), it seemed my creativity and ability to reflect had gone into hiding. The struggle to make ends meet had consumed my tired consciousness; and my body, longing for respite, has now manufactured a cold, for which I am very grateful. It has provided me with the time to unleash and solidify the thoughts that have been blunting themselves, rattling around in my head.

Overwhelmingly, it continues to be made apparent in my own experience, that responsibility is key. To engage with life, money, humans, creativity, it is essential that I take personal responsibility for my thoughts, my choices and my actions. It is essential that I take charge of my own beliefs, lest my beliefs are dictated to me by those who would use me for their own purposes. The media are the selfish, petty, manipulative gods of this age, and this trend filters down through the layers of society. I dislike being made a fool of intensely.

Here is the podcast of Dr. Williams’ lecture.